Corsair is a game for the Atari Falcon030, released by Impulse in 1997.

Full manual is available in English and Spanish. Have a look at the reviews.

Two players control the two cannons and shoot the aliens. Each cannon can fire straight forward and a 45 degree shot towards to other player. This is because the enemies will, unless destroyed, land on one of the rails and continue towards the cannon on that rail. That player is now helpless and must be rescued by a 45 degree shot by the other player. However, they must cooperate well so that not both have an enemy on their rail.

System requirements: Corsair requires 4Mb RAM and works on both RGB/VGA monitors and TV (RGB is recommended). It is compatible with 68040 and Nemesis. 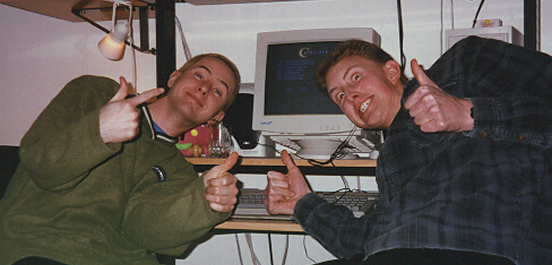 Mandus and Reine after completing the final testing phase of Corsair in 1997. 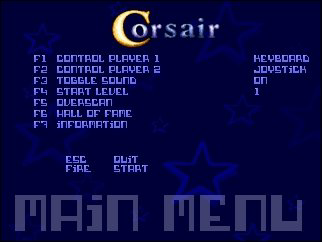 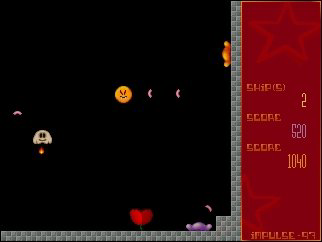 Bobby the Hippie Ghost makes a cameo as evil bomber, with his partner in crime, Mr Ken! 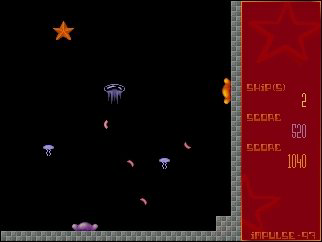 The Water World. Beware of the lethal jelly fish!. 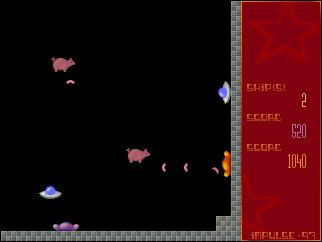 Here they come, the Pigs In Space! 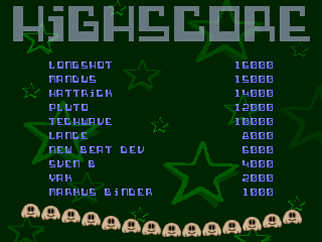 “Sounds complicated, but it’s quite the opposite, young and old will love this game. Nice big colourful aliens, humorous (even hilarious!) sound samples and fast action make this a simple yet addictive game.”
— Andrew, Falcon’s NeST PDL

“This is where it is brilliant, because to survive you need to help each other. E.g., if an alien touches the ground, the gun of the other player can then remove the first player’s adversary, thus saving the life to him, just like it can shoot him in the face and gain a max of points!”
— Toxic Mag 15 (1998)

“The game itself plays well with a good difficulty curve. The aliens start off moving in a linear manner giving you a chance to familiarise yourself with the controls before the more vicious bouncing and bombing baddies appear. The graphics are nice and cute and perfectly complement the style of the game.”
“Full marks to the comedy plot in the doc file which nods at the Double Bobble story. Nice to see another crew not taking itself too seriously.”
— Leon O’Reilly, Maggie 25 (March 1998)